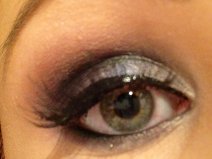 Hey girls,i hope you're week has been kind to you! Today i have created a look using some of the eyeshadows i purchased from "Femme Fatale Cosmetics".I had alot of fun playing around with these,especially since these eyeshadows have so many colour shifts to them like "Wisp" one of the colours i have used for this look under some lighting it looked like a true silver,then under other lighting it would look quite blue.I love that in an eyeshadow! Something else i thought i might mention too,is if you "Like" the Femme Fatale Facebook page the sales that they have will pop up in you're news feed,and who doesnt want to snap up a bargain! Anyways on to the makeup,i hope you like this look! 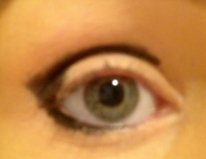 -First i applied eye primer over my eyelids,then using the "Zero" eyeliner i traced around the crease of my eye not taking it all the way in i also made a little wing on the outside of my eye, 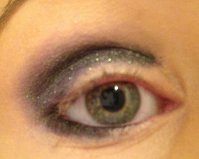 -Next i dabbed a tiny bit of the "Pixie Epoxy" on my finger then patted it on to my eyelid.I used this when ever i am using loose eye shadows,its almost like an adhesive and makes the colours brighter and richer.
I then used "The Nightmare" on a pencil brush and applied that over the top of the "Zero" Pencil. 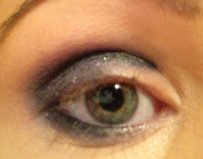 -After that i used "Smokebomb" on a flat eyeshadow brush and patted that colour down on the outer half of my eyelid (top and bottom) it also over lapped a little over "The Nightmare". 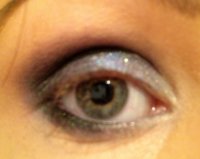 -Next i used "Wisp" on a small eyeshadow brush taking the colour almost all the way into the inner corner of my eye,the idea is for the colours to be slightly over lapping so you want to pat a little of that colour over the top of the edge of "Smokebomb" 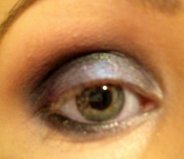 -After that i used "Moonglow"on a small eyeshadow brush and applied that     all around the inner corner of my eye.I also used "Inscribe" on a small blending brush and blended around the outer half of "The Nightmare" 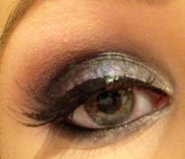 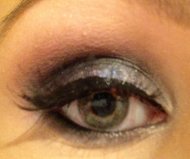 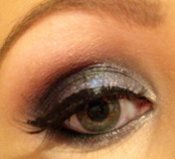 What do you guys think? I LOVE these eyeshadows! Thankyou so much for stopping by and dont forget to comment below :)

Thanks so much for stopping by my little Beauty space,make sure you leave a link to you're blog so i can visit!